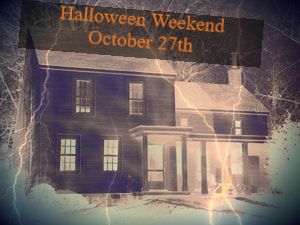 Thomas Paine, the Davoue family, Colonial Soldiers – just a few of the spirits that have been encountered through paranormal investigations, caretakers & visitors. Is Paine still angry about the Christmas Eve bullet barely missing his head? Perhaps, he still roams the grounds waiting to be reunited with his robbed remains from his now empty grave.
Are you ready to share this phenomenon with us?
Number of Attendees will be strictly limited. Reservations begin 10/1/18.
Our investigations are involved & personal.
Members only presale begins 9/17/18. Check your email for Presale details.
$50 ~ includes an evening of investigation, wine & beer reception, soft drinks & snacks.

We will be holding a raffle to win entry. Each entry will be $10 and no more than 50 tickets will be sold. Raffles will be sold at the Paine to Pain Marathon Oct. 7th and continue until October 20th or until all 50 tickets are sold. Contact us for location purchases. Proceeds benefit future events and educational programs.
Ticket Purchase
<
>
This is NOT a Halloween Haunted House. This is a genuine Paranormal ghost hunt. The professional team of Paranormal 718 will guide attendees through out the Paine Cottage, room by room using the latest technological equipment used in the Paranormal field today. No room in the Cottage will be off limits. All will be explored. Weather permitting, the team will also explore the Sophia Brewster One Room Schoolhouse on the grounds of the Cottage & Thomas Paine's grave site.
PAST EVENTS
August 2014, Paranormal 718 visits the Paine Cottage for the first time. Spirits answer with great enthusiasm that yes, Paine is present, a revolutionary war British soldier, (who is fearful of the past caretaker that frequently dressed as a Colonial Soldier) and past family inhabitants are all still present. A mysterious flash flies through the Paine Room.
RECENT EVENTS
August 2018, Paranormal 718 returns to Paine Cottage. Using  Kinect equipment, spirits reveal themselves in the WWI exhibit room, the Local History Room and the oldest portion of the cottage, the Attic.
Ongoing experiences, electronic equipment suddenly not operating properly. Cold breezes in locations with no windows. School children seen in the Sophia Brewster One Room Schoolhouse when closed and locked.
HISTORY OF THE COTTAGE
Founding father Thomas Paine is awarded the 277 acre farm in 1784 from a grateful State of NY for services during the Revolutionary War. He lives at the farm from 1803-1806. His time here was not always happy as a bullet barely misses him as it flies through the now current Paine Room on Christmas Eve. He dies in 1809 in Greenwich Village and his remains are interned on the grounds near the current North Avenue and Paine Avenue. Only six people attend his funeral. A popular nursery rhyme at the time -
Poor Tom Paine! There he lies:
Nobody laughs and nobody cries
Where he has gone or how he fares
Nobody knows and nobody cares.
His sleep was not a restful one as his remains were dug up and stolen never to be recovered again. A Paine fan William Cobbett, exhumed Paine's body and shipped it to England where he hoped to build a proper memorial but shortly after Cobbett's death, the remains were lost. To this day, his grave site remains empty. Some say that is why Paine's spirit remains at the Cottage.

Owner and key investigator, Vincent Anthony of Queens NY, had his first encounter into the paranormal at age nine. While cleaning out his recently deceased grandfather's home, Vincent stepped into the house to get something to drink. There standing some 20 feet from him is his grandfather. "It was like one of those things out a movie, you rub your eyes and look, but even as a kid, I knew who it was," he explains, "and in a matter of two seconds he was gone. And that hasn't left me after 25 years." So started Vincent in his continuing journey.
In 2005, dissatisfied with the group of investigators he found available, Vincent decided to create his own group and Paranormal 718 was started. "They were too busy worrying about their Facebook status or their MySpace status, they were too busy trying to sell merchandise," he said. His investigations are based upon what he can actually record and measure, as scientific as one can be investigating the paranormal.
This has become a family affair. His wife is known to accompany Vincent on his investigation.  "I feel there's no harm nor foul as far as [him] investigating something which many people may feel skeptical towards," she says. "I myself was 50/50 as far as believing in life after death. I have my beliefs in Catholicism being raised Catholic; but I myself never had any personal experiences to sort of validate such beliefs. And I think that's key to the skepticism...we always want proof and validation.”
Vincent takes investigating to the ultimate. In 2013 in a known haunted cemetery in upstate NY, Vincent buried himself alive in a actual coffin, four feet under ground - In an abandoned 1755 Dutch Farmhouse located in Harrisburg Penn., he locked himself alone in the farmhouse from 9-6a while his crew remained outside some 20-30 ft. from the farmhouse. His investigation was monitored by 10 cameras throughout the house and a chest monitor Vincent wore monitored his vital signs.
Wanting to bring all interested into every investigation he does, Vincent allows people to log on and follow many of his investigations as they happen live.
In this crowded field of investigators, Vincent and Paranormal 718 stands apart as pure investigators. They invite you to find your truth of the paranormal.
Find Vincent & Paranormal 718 on Instagram NYPARANORMAL718.

excerpts taken from the Gothamist article 2014