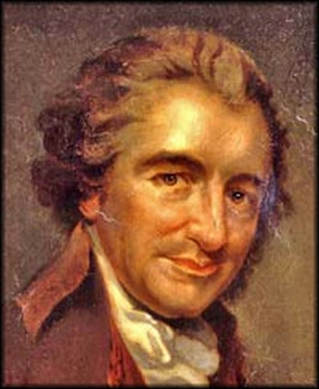 "We have it in our power to begin the world over again."

"These are the times that try men's souls. The summer soldier and the sunshine patriot will, in this crisis, shrink from the service of their country; but he that stands it now, deserves the love and thanks of man and woman." - American Crisis No. 1, December 1776

"PERHAPS the sentiments contained in the following pages, are not yet sufficiently fashionable to procure them general favor; a long habit of not thinking a thing wrong, gives it a superficial appearance of being right, and raises at first a formidable outcry in defense of custom. But tumult soon subsides. Time makes more converts than reason…
I offer nothing more than simple facts, plain arguments, and COMMON SENSE…"
Thomas Paine, author of Common Sense was an obscure immigrant when, on January 10, 1776, this small pamphlet was published. In the first three months, 100,000+ copies sold helping to ignite the flame of independence in America!

Paine Cottage before it was moved to Sicard Avenue
The cottage was saved from demolition and moved in 1908 from it's original location, near 135 Paine Avenue, to where it sits today on  20 Sicard Avenue. The location is part of the original 277 acres and is adjacent to the site where Paine was buried in 1809. Declared a National Historic Landmark in 1974, the Cottage is the last existing building in North America that was owed by Thomas Paine.

The Thomas Paine Cottage Museum is owned and administered by the Huguenot & New Rochelle Historical Association. It operates as a Museum and has been opened to the public since July 14, 1910. 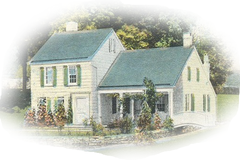 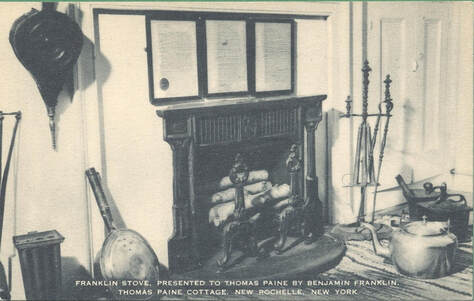 The Thomas Paine Cottage is a small two-story frame house of the saltbox type with a central chimney & a gable roof with a long slope to the rear. Exterior walls are covered with shingles. The oldest portion of the cottage is 16 feet wide & 31 feet deep. A one-story frame wing about 18 feet wide & 23 feet deep, with a porch across its front, was added to the cottage in 1804.
The main house is three bays wide & has the entrance set in the right-hand bay. There are three rooms set one behind the other in the main house - the kitchen in front (now used as an activity room), a small room in the center heated by a Franklin stove (the video room exhibiting 18th century & Revolutionary items), which was presented to Paine by its inventor, Benjamin Franklin, & a bedroom in the rear (now the basement area). The wing to the right, once a parlor area & used as Paine's bedroom/sitting area has been renovated to reflect how it appeared when Paine occupied the cottage. 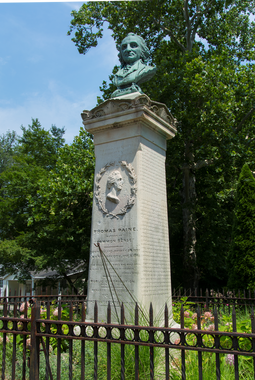 There are five rooms on the second floor. Four are now used as exhibit areas. There is currently a Huguenot Room, a History of New Rochelle & a D-Day WWII exhibits. Our members only research library is now opened with free internet access.
The entrance door and the square pillars of the porch on the wing are Greek Revival and were added about 1830. The exterior wood shingles are replacements of the originals. The wide board flooring, frame, plaster walls, and chair rails are all original.
The cottage was moved to its present site on the corner of Paine’s farm in 1908 in order to save the building when the remainder of his farmland was subdivided.
Near the Paine Cottage stands the Thomas Paine Monument, erected in 1839 and topped by a bronze bust of Paine by Wilson McDonald that was added in 1881. The monument, owned by the City of New Rochelle, was located at its present site in 1905; at the intersection of Paine Avenue and North Avenue.
Paine instructed in his will that he be buried in a Quaker cemetery, "...if they do, or will admit me, I would prefer being buried there". The Quaker's denied his request. His alternative site was on his farm in New Rochelle, NY. "But if it is not consistent with their rules to do this, I desire to be buried on my own farm at New Rochelle.The place where I am to be buried, to be a square of twelve feet, to be enclosed with rows of trees, and a stone or post and rail fence, with a headstone with my name and age engraved upon it, author of "Common Sense." Paine died in Greenwich Village on June 8, 1809 and was buried on his farm on June 10, 1809. 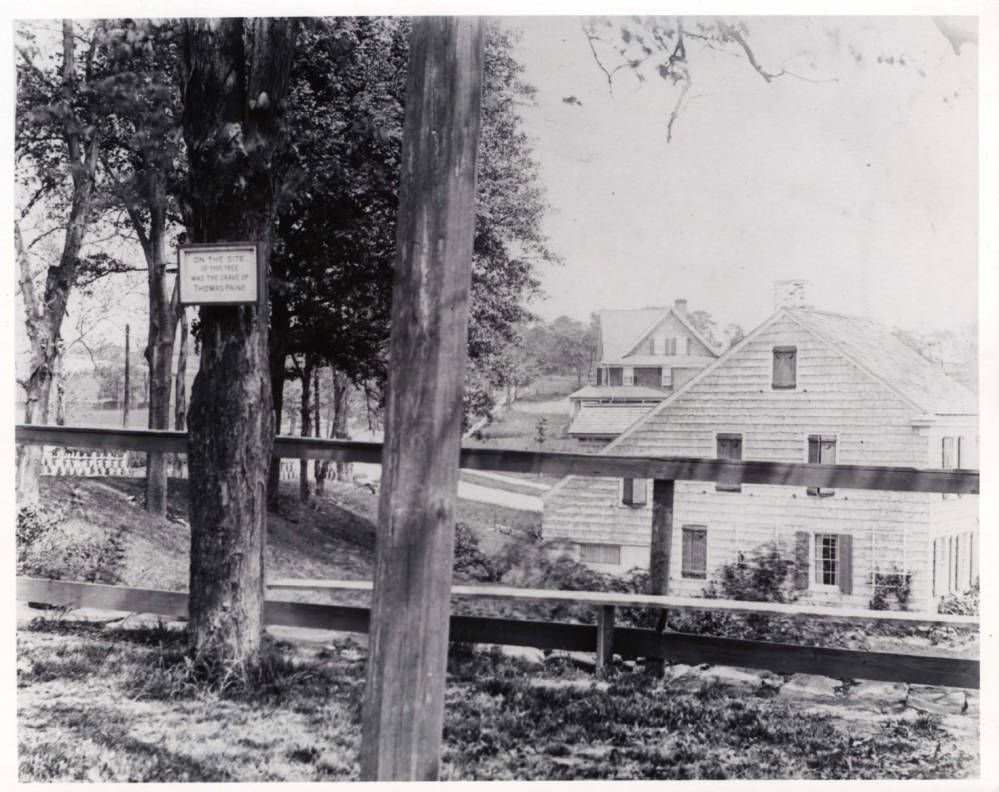 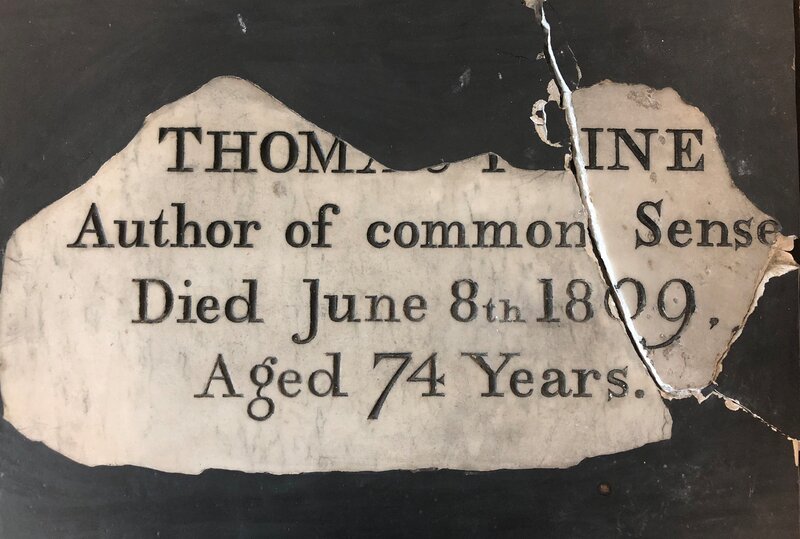 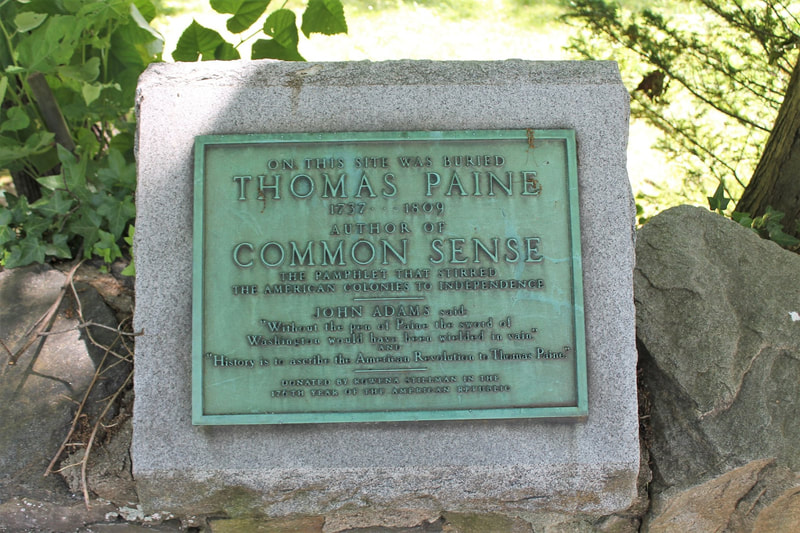